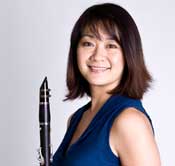 Belgium. 1999. “I would like to come and play for you, and maybe I could study in school where you teach,” Ixi Chen, a young American clarinet player, was on the phone with her childhood idol Sabine Meyer, German clarinetist, one of the most outstanding soloists of our time. Two weeks later with a little backpack and clarinet in her hands, Ixi headed to a very small German town outside of Wiesbaden. It was a rainy day when she arrived at her destination. The Schloss Gottesauer, a palace where Sabine Meyer was performing that night, was a long way from the train station. Ixi was cold and wet when she eventually reached the church. She recalls that trip as the most memorable in her life because that evening she played for the person who became her biggest influence. Later Ixi attended Hochschule für Musik in Karlsruhe as a guest student of clarinetist Wolfgang Meyer, Sabine’s brother.

For over 15 years, Ixi Chen, a clarinetist and educator, has been enjoying her professional development. Numerous concerts and music festivals have taken her to the major musical centers of Europe and Asia. Following her studies at the Manhattan School of Music and the University of Southern California, Ixi accepted the post of Second Clarinet of the Cincinnati Symphony Orchestra in 2001 and made the Queen City her home. In 2004, she joined the clarinet faculty of the University of Cincinnati College-Conservatory of Music. Ixi’s orchestral concerts have appeared on several media broadcasts: ZDF (German television), NordDeutsche Rundfunk (NDR; North German Radio), SudDeutsche Rundfunk (SDR; South German Radio), KUSC Los Angeles, KQED San Francisco, and WGUC Cincinnati. Orchestras with which she has performed include the Manhattan Chamber Music Group in New York, and the Philharmonic Winds in Germany and Cincinnati’s Linton Chamber Music series. Chen’s energy and artistic creativity led her to develop music outreach projects in New York, Los Angeles and Hamburg. In 2006, she founded concert:nova, a Cincinnati based chamber ensemble that brings together visual and performing arts.

Ixi Chen was born in Taiwan in a family of strong cultural and musical traditions. Her parents, who are very passionate amateur signers, surrounded her with music and songs. She was three when her family decided to move to the US in order to give the children as many opportunities as possible. They landed in Chicago and subsequently moved to California where her parents made a living from engineering work. In her childhood, Ixi embraced various educational activities through studying physical and creative arts including gymnastics, ballet, karate, baton swirling, theater, painting, design, sewing and others. At age 5, she began learning the basics of music theory and taking piano classes. Her understanding of music harmony was later converted to another instrument – clarinet that has became part of her life and developed into a passionate interest in music. It happened to be the brilliant Dvořák’s Symphony # 9, “From the New World”, performed by the school youth orchestra, that fascinated her by the intense power of music and collaboration of young musicians who made that music possible by bringing its different parts together to create a wonderful harmonic sound. That day defined her professional career as a symphony orchestra musician.